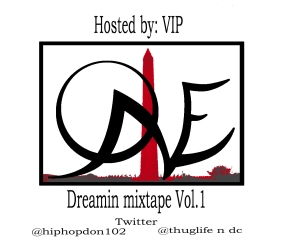 BIO: Wassup world  My name is Quaine from Washington Dc and I am half of the music group, O.N.E-OneNationEmpire) Ive been writing music since the age of 17 music is my life. I love writing an my biggest dream is to set a vary  aggressive mark no human can ever touch i won’t the  world to  remember us as the best rapper/songwriters of this time. Thug life is The philosophy so thug life is what we write about. My favorite MC growing up was 2pac so we chose One Nation to keep his legacy Going. The outher member of my team go’s by the name of Kdogg aka Bruno he to is a song writer with a lot of passion &   aggression. We plan to takevover so yall get ready  people love to say we the nex Boosie an Webbie (Free Boosie) What inspired this mixtape Dreamin is my big cousin Dre. From the hit HBO.  Documentary Thug Life n DC (Free Dre) He is the older brother of Kdogg an has a lot of love an respect around  the city. We just won’t the world to no how it is growing up in the Streets of DC. We started out making demos in the basement but then moved up to doing shows. Around the city an even hit a few spots out NY where we got a lot of love. I had  big help putting this mixtape together. S/O to my Brother MrKennedy on the track. Pero/$peedie, BlueEyes, L.V.S. an Cle Marrow. On the cover get at us on twitter @ HipHopDon102 an @ThugLifendc. @chaneerahjanee @Blue Prada We love making money so if u love making money. Get down wit The Family O.N.E Stand up last message to the world (STOP CRYING .. S/O DJ V.I.P.)